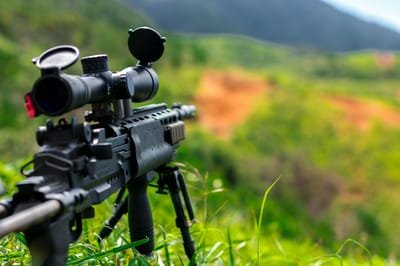 All binary powders are not the same. When shot in the open by firearms, a great deal of the potential gas/detonation velocity is lost by most binary mixtures, compared to its confined velocity. Lets classify and explain the differences, and how American Powder Works has overcome many of those issues.
Flash powders
These powders were originally developed with photography in the 19th Century. They actually do not explode, because they do not reach a detonation, and propagate through rapid deflagration (burning). These are the majority of rimfire sensitive compounds on the market, even though they demonstrate some of the most dangerous characteristics of reactive chemical compounds. These compounds are typically heat, static, and friction sensitive, and have been known to become unstable rather easily, hence why most manufacturers use them for rimfire targets. (Also why most of these manufacturers have also been sued for unsafe products.) In addition, many add sand to make them more friction sensitive, increasing this dangerous attribute.
The increased sensitivity is due to their ability to release energy easily and quickly. However, this attribute also slows down the potential velocity that can be reached. These powders demonstrate a flame velocity of about 7500 feet per second (fps) when contained. These compounds typically also do not do well with rimfire ammunition past 150 yards.
Blasting agents
Blasting agents typically consist of an ammonium nitrate base, combined with a fuel (liquid or solid). These are limited in their explosive potential, since their need to remain sensitive enough to start the detonation process with a rifle bullet, which requires compromising an optimal fuel/oxygen ratio. To overcome this, in liquids it is common to see the use of nitromethane and other aromatic hydrocarbons that are explosive in nature. (Simple use of fuel oils creates compounds (ANFO) which will require a primary explosive to start the detonation process.) The use of aluminum is quite common, since its low melting temperature of 1800F starts this process quite nicely, and is often used as an additive in liquid compounds. Other metals and flammable solids can also be used to produce these compounds, yet yield limited potential for use with firearms due to the need for senstitivity.
A compound of aluminum and ammonium nitrate (sometimes with augmentation of other fuels and oxidizers) produces a compound called ammonal. Ammonal was first developed by the British in 1916 as a TNT replacement for use in landmines during WWI.  This compound is used in the majority of binary target kits due to its sensitivity to gunfire. It is not oxygen balanced, since doing so would not allow it to start a detonation with a rifle bullet.
Tannerite, a brand name of another popular target kit falls into this category. It demonstrated in our testing a contained gas/detonation velocity of between 9000-9500 fps.
American Powder Works Bulk Binary Kits (8 and 35 pounds) would also fall into this category, and demonstrated a contained gas/detonation velocity during testing of between 14500-15000 fps. This powder creates a specially formulated blasting agent when mixed (roughly 2.5 times the blast effect of common ammonal).
High Explosives
This category will not be covered since the topic is strictly storage legal binaries. Typically the velocities on these compounds vary between 20000-24000 fps when contained.
Thermobaric Compounds
This is a brand new invention, based upon the type of explosive reactions seen in thermobaric devices, and not normally seen in an explosive compound.  Typically, thermobaric devices utilize atmospheric gases to generate a high temperature explosion with a longer duration than conventional explosives. Normally these devices utilize high explosives, and liquid or solid fuels in the atmosphere, to obtain the long duration explosions.
The compounds in the American Powder Works Rimfire, and Centerfire Enhanced Target Kits utilize a unique formula to obtain a thermobaric reaction when mixed and shot.  Utilizing end products and atmospheric gases, this product produces a secondary reaction that has a duration of 1-2 milliseconds (a typical explosive detonation has a duration of a fraction of a millisecond). When contained, these compounds have demonstrated incredible velocity, and when uncontained produce unparalleled performance not matched by any other product on the market, in both reliability and signature.
Uncontained, these kits produce a pressure bubble due to a drop in atmospheric pressure. This allows most of the velocity that is lost due to the missing containment vessel to be retained, and then transmitted in that final pressure wave. (This is seen in the picture, with the initial explosion having happened on the ground, with this final fireball erupting about 1 meter above it. Note initial pressure wave about to hit camera.) This action also negates any burning metal from leaving the reaction area, eliminating the fire risk normally associated with blasting agents.

The Rimfire Target Kit was developed in 2014, with bullet sensitivity as its primary performance attribute, with greatly improved safety not seen in other rimfire powders. Unlike flash powders that are normally used for rimfire rounds (that show bullet sensitivity end at 100-150 yards) this kit is quality control tested at 300 yards with a 36 grain/1250fps 22 Long Rifle round (Remington Golden Bullet). When mixed and presented with open flame, it burns very similar to common smokeless powder. It does not show impact sensitivity, passing a 1 meter/10 kg drop hammer test repeatedly (flash powders explode on this test). This kit demonstrated a contained gas/detonation velocity of between 23500-24300 fps (roughly four times the explosive effect of ammonal, pound to pound).
The Centerfire Enhanced Target Kits was developed in 2017 with explosive signature in mind. Utilizing the similar variation that we made to pursue a military high explosive contract, it benefits from a longer duration in its explosion than the rimfire, but lacks its sensitivity. This mixture provides a long range signature unmatched by any product on the market, pound for pound. This kit demonstrated a contained gas/detonation velocity of between 25100-26000 fps (roughly five times the explosive effect of ammonal).
Research has also produced a compound that has a gas/detonation velocity in excess of 30000 fps (8 times explosive potential of ammonal). This product will not be made available to the public, and was designed for military applications (it lacks the sensitivity needed for gunfire detonation).